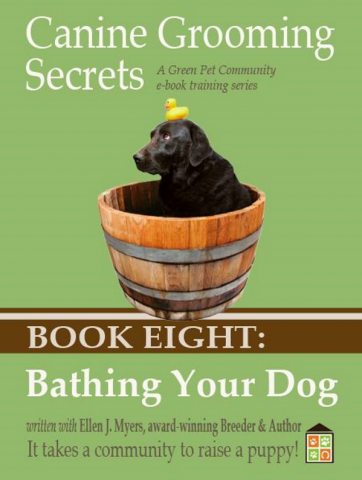 When it comes to bathing a dog, it couldn’t be any easier, right? I mean, you simply stick a dog in the bath, run the water and scrub away. Simple, fast and easy . . .

The problem is that the method described above is wrong. Bathing is often one of the most despised chores of dog ownership. It’s not just the dogs who hate having the baths; owners often hate giving them.

Usually, the dogs are not the only ones who come out of the bath soaking wet. Because of this, many people avoid giving their dogs a bath, and when they do, they are so focused on getting it done quickly that they forget some important things about properly bathing their dogs.

However, it doesn’t have to be difficult. Bathing can be enjoyable for both you and your dog, and if you follow the tips included in this book, you are sure to have a perfectly groomed dog by the end, and you might even enjoy the process!

Before we go into the tips, I want to stress the importance of training your dog to enjoy baths. Accustoming your dog to baths as a puppy will ensure that he enjoys the baths.

Also, training him to get into the bath on command makes it much easier, and can actually condition them to enjoy baths. I once knew a Labrador Retriever who loved her baths, but only if it was a warm shower. One mention of the shower and she would rush to the bathroom, climb into the tub and then close her eyes. Once the shower turned on, she revelled in the spray and it could be difficult to get her out of the bathtub. While you would expect to any Labrador

Retriever to love water, her owner’s other lab would run to the other end of the house at the mention of a bath.

I mention this to highlight the differences in training: the lab who hated baths was older and had already gone through training before his owner realized that she should train a dog to accept baths. The female lab went through the proper conditioning, and bath time became a dream and not a nightmare.

The key is in training, which is something I recommend for anyone who owns a dog. Get your pet used to the bath at a young age and you will find that baths are much easier.

After that, all you will need is a bit of knowhow on properly bathing your dog and the days of struggling to get your dog bathed will be behind you.